Reducing transfer risk is a big part of any player recruitment strategy, and one of the biggest risk factors is the uncertainty about players transferring skills from one league to another. We can never say for certain how well a player on team X will perform for team Y. This makes fair comparisons of players in different environments difficult. But what if we could use data to build a framework to assess these on-pitch effects and allow clubs to project how players transferred from one league will perform in another?

This week, we integrated a new development into TransferLab’s “Exchange Rate” functionality. The tool already adjusted player output based on the quality of competition that they are playing in, calculating how that output would translate to the Premier League. Now, the user can further select what ‘tier’ of competitions they would like to compare the player to.

To explain our methodology, it’s probably a good idea to recap the underlying algorithm which powers our TransferLab platform.

The framework for Transferlab is built around a ‘Markov chain’ model. Within our model, build up play can be viewed as follows: when a team has possession in a certain position, they can either shoot (and score with some probability), or move the ball to a different location via a variety of actions (pass, dribble etc). This continues until the team either loses possession, or scores a goal.

Therefore, every action (both attacking and defensive) which occurs during a 90 minute match can be awarded a positive or negative value based on its effect on a team’s likelihood of scoring or conceding.

Basically, a “good” player in our model is “good” because he contributes highly towards the probability of the team winning!

Leagues have also been grouped into tiers that users can choose to compare a player against. The are also differences between leagues within tiers too and these are also accounted for in our model. This creates bigger populations to compare players against across broadly similar levels of competition. For Example, Tier 1 consists of the big 5 leagues (Premier League, La Liga, Bundesliga, Serie A, Ligue 1).

TransferLab combines this tiering process with our player performance algorithm to offer the ability to deep dive into a players on-pitch metrics and compare a players’ output instantly against any tier of football in the world.

Neal Maupay offers an interesting case study for this functionality, with the Frenchman moving to a Tier 2 club (Brentford, in the English Championship) before the 18/19 season to a Tier 1 club (Brighton, in the English Premier League) this summer.

As can be seen from his 17/18 output, Maupay was one of the best chance-getters in the league at Brentford, while his all-round performance was also very strong. Compared to Tier 2 players, Maupay looked like an elite goalscoring striker, and considering he only played 2319 minutes in this season, it was clear that a consistent starting-berth could allow Maupay to score 20+ goals in the league in 18/19. 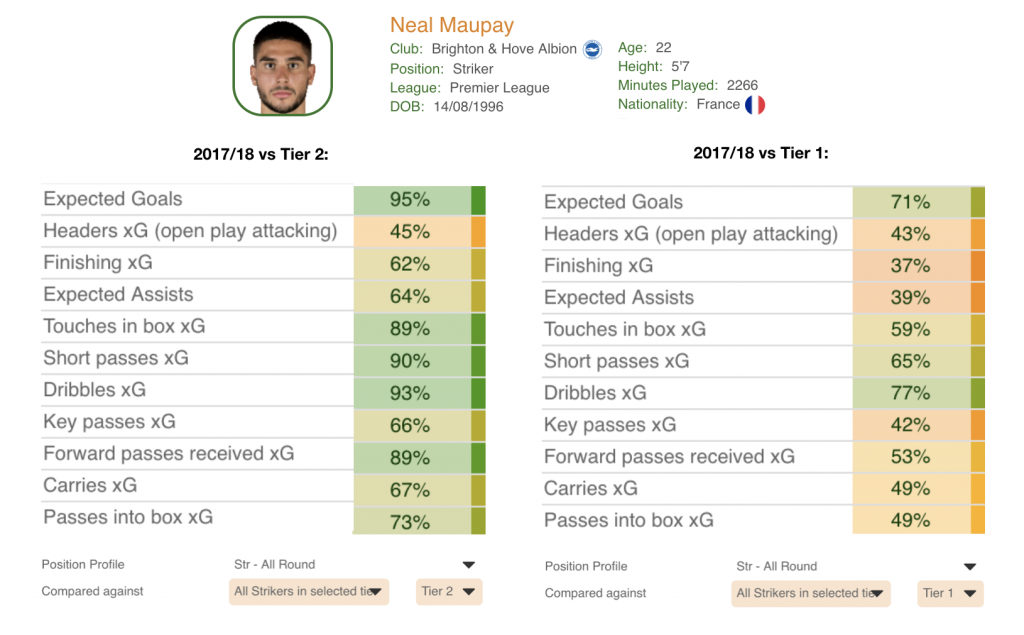 At this point, i.e. still in the summer after the 17/18 season, comparing Maupay to Tier 1 players suggests that he would be a good chance-getter in the Premier League, and a generally slightly above average Premier League striker overall. If you’re a mid-table or lower Premier League club, like Brighton, it’s exactly the sort of profile that you might be looking to bring in without breaking the bank.

In 18/19, Maupay’s Championship underlying output was very similar to the season before. The only difference is that he did it over 1500 more minutes in the league, scoring 25 goals and almost finishing as the top-scorer in the competition. Compared to Tier 1 players, his performance is marginally better than the season before – where he was in the 71st percentile for Expected Goals in 17/18, he is in the 82nd based on 18/19. 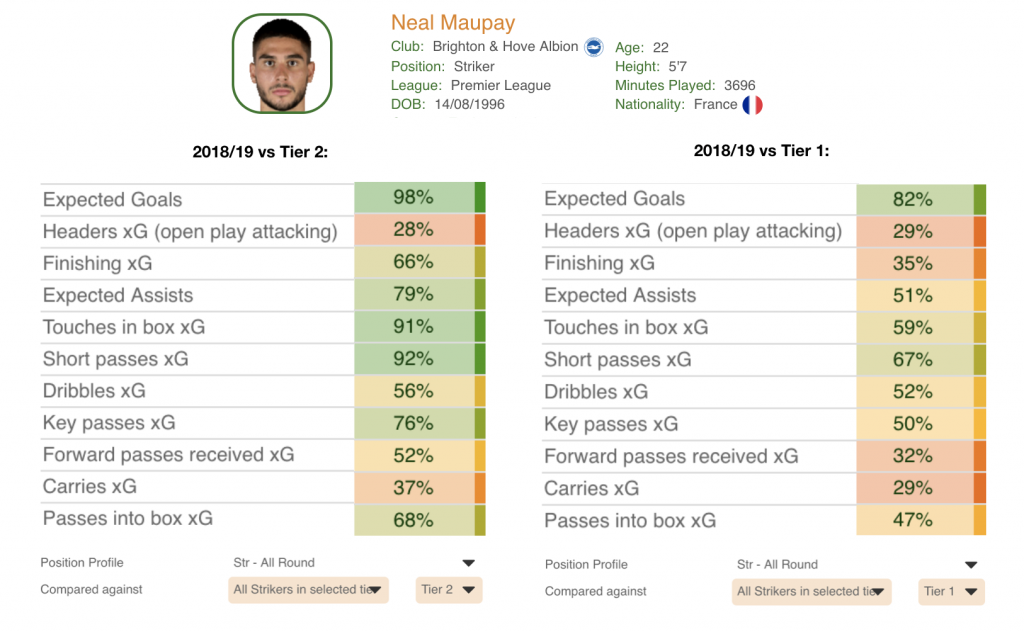 Brighton stumped up around £20m to bring Maupay into Graham Potter’s squad, and it’s worth considering the value of such a transfer. Although Maupay performed well for Brentford, his projected performance in Tier 1 based on his 18/19 Championship performance is basically the same as it was in 17/18, before he doubled in transfer value. In other words, we do not have any reason to believe that Maupay is substantially better than he looked a year ago – in fact, his prolific goalscoring for Brentford seemed predictable given his underlying metrics the season before.

Of course, there are a variety of other factors that can make talent translation less predictable than the Maupay example may make it seem. There are innumerable off-the-pitch phenomena: cultural change, language barriers, and lifestyle issues to consider. Nonetheless, our latest “Exchange Rate” functionality gives clubs a robust insight into how the on-pitch performance of a player might change, for the better or worse, across leagues. The impact upon reducing transfer risk could be significant.