In this series, Josh Hobbs explores some of the novel metrics we have been able to develop using the TransferLab algorithm.

At Analytics FC, we have attempted to overcome this problem by building a model which begins to interpret the raw data. Using our unique TransferLab algorithm—a Markov Chain model—we are able to take events that happen on the football pitch and ascribe them a numerical value which indicates how much an action improved that possession’s probability of ending in a goal (and just as importantly, how much it reduced the other team’s chance of scoring on the next possession).

The beauty of this approach is that it allows you to farm the data to find the sorts of actions that are creating value for teams and model your game style to reflect that. If a certain pass into the box is proving a good source of value for a team, then the coach might want to think about ways to encourage those sorts of actions within the game. Suddenly, data and coaching are much more closely aligned.

In this series, we are going to explore some of these actions that add value to a team’s game.

There is an area the width of the six-yard-box and the length of the penalty area dubbed the ‘Golden Zone’. This area is where 50% of total shots are taken from and 82% of goals are scored from.

This graphic from American Soccer Analysis breaks down various ways in which teams attempt to create shots in this zone: 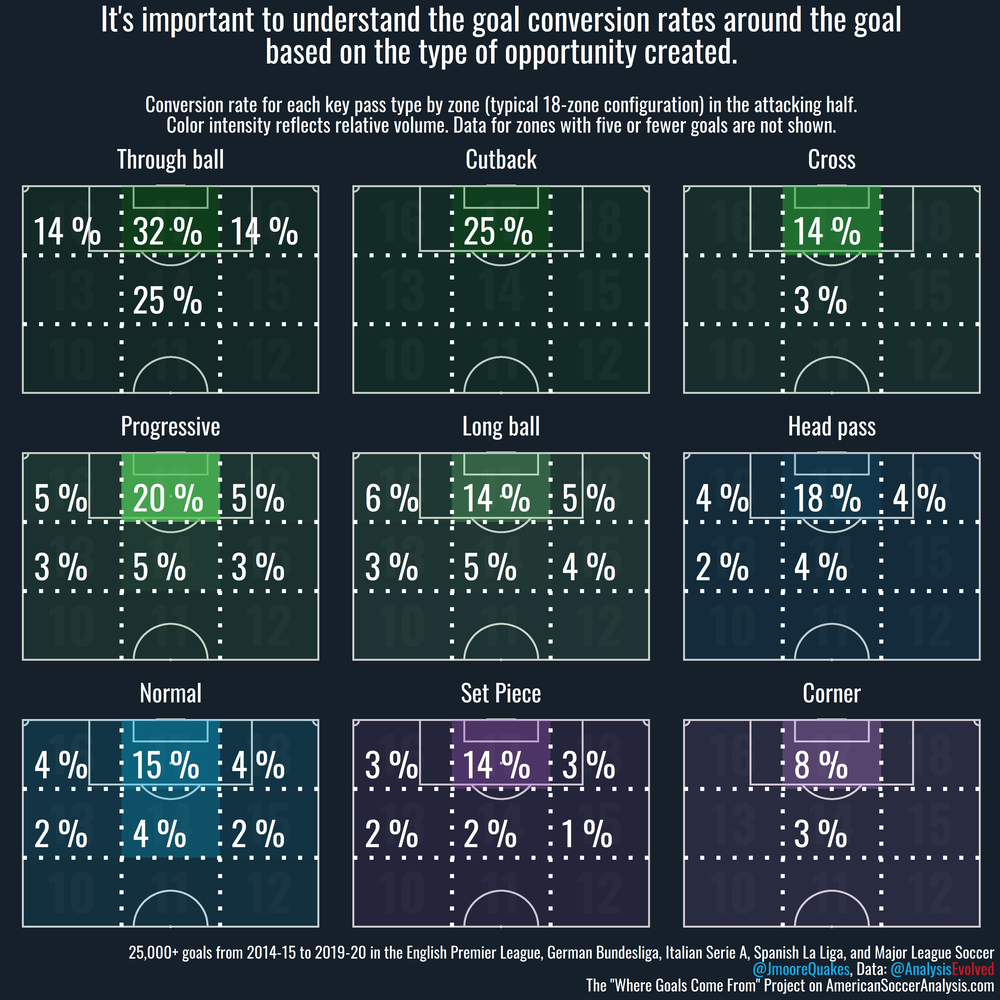 As the graphic shows, cutbacks are one of the key ways in which teams do this.

Cutbacks are low passes that originate from around the byline on either side of the six-yard box and see the ball moving backwards towards the ‘Golden Zone’: 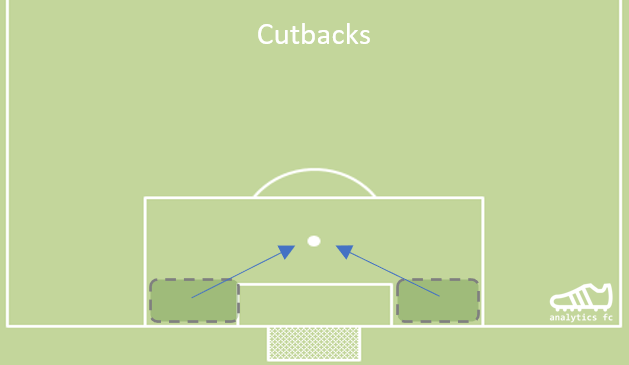 Cutbacks tend to generate high-value shots according to expected goals with conversion rates from cutbacks into the Golden Zone being valued at 25%. This high figure results from the fact that cutbacks create first-time shooting opportunities with the shot-taker running onto the ball and striking from close range with opposition defenders turned towards their own goal.

Coaches like Pep Guardiola have recognised this and made cutbacks a key part of their attack. Manchester City’s Premier League-winning side of 18/19 is one of the first that comes to mind when thinking of cutbacks with Leroy Sane and Raheem Sterling regularly getting to the byline to create:

With that in mind, it’s extremely valuable to have players in your team that will regularly get into position and get their heads up to make cutbacks into an area where a teammate will be arriving.

Finding the best performers in TransferLab

Using the TransferLab algorithm, it is now possible to find players who add the most value to their team’s goal difference through cutbacks.

In TransferLab, we now have access to a new metric: ‘Cutbacks (Quality)’. Sorting our database by this metric and filtering for players who have a minimum of 720 minutes in TransferLab’s top three tiers of competition, these are the top performers for the 20/21 season: 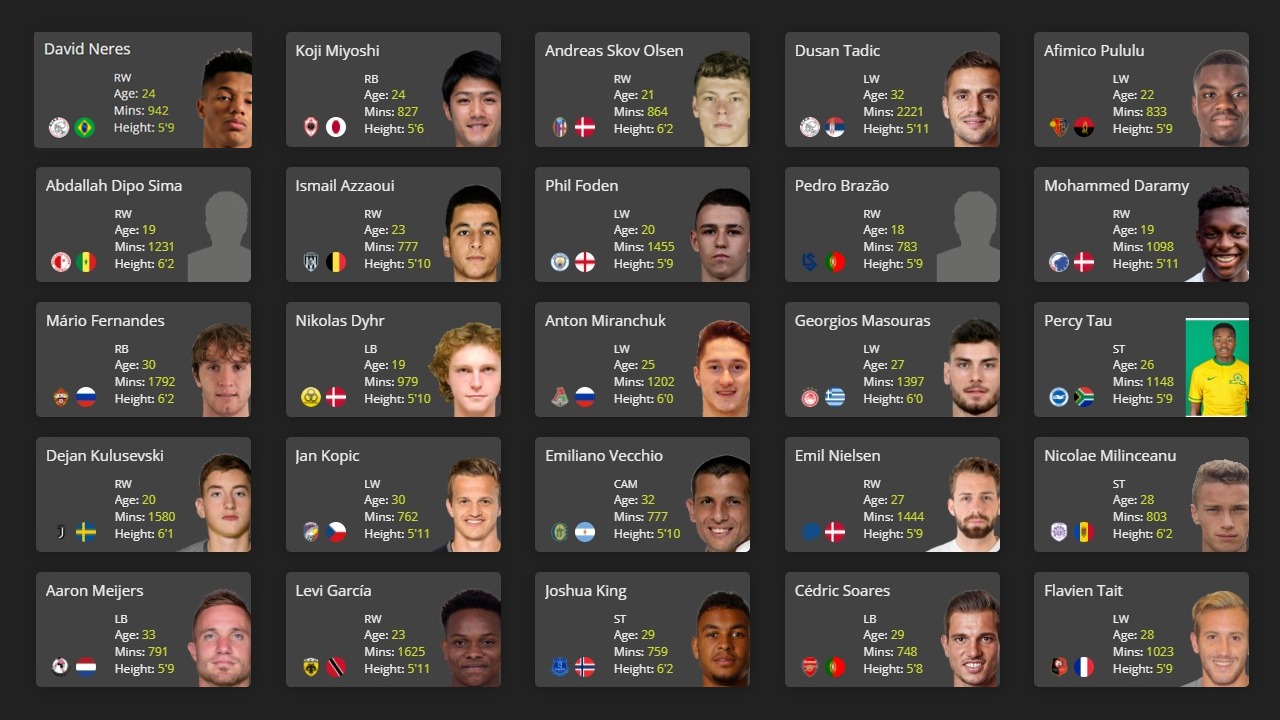 Given Manchester City’s strategy to maximise opportunities from cutbacks, it’s no surprise to see Phil Foden, who has primarily featured on the wing this season for Guardiola’s title chasers.

In this clip, observe how many forwards Manchester City had flooding the box as Foden drove to the byline:

The goalscorer, Ilkay Gundogan, ran to the near post. Sterling was positioned just in front of the penalty spot and Gabriel Jesus was attacking the back post. None of these players were marked and would have had tap-ins if the ball reached them. They made sure to give themselves the best possible opportunity they could to get a good shot away. This illustrates how effective cutbacks can be.

Back to the list of the best executors of cutbacks, it’s also notable that there are two Ajax players on the list: David Neres and Dusan Tadic. Ajax coach Erik Ten Hag previously worked under Guardiola at Bayern Munich and is an excellent tactician in his own right. He has made getting wingers and overlapping fullbacks into positions to make cutbacks with runners arriving in the box a key part of their attack.

This goal is an example of how a cutback can work without resulting in a tap in, but still presenting a clear, unpressured shot at goal:

Dusan Tadic, who ranked 4th in the TransferLab metric, draws four Groningen defenders towards him with his run as three Ajax players attack the centre of the box. Tadic was able to spot Ryan Gravenberch on the edge of the box, who had a far easier finish than would usually be expected from 18 yards out.

Some other notable performers from the TransferLab list are teenagers Abdallah Dipo Sima of Sparta Prague, Mohammed Daramy of FC Copenhagen, Nikolas Dyhr of Horsens and Pedro Brazão a player on loan from Nice at Lausanne Sport.

It’s interesting that within that group of players there are three wingers and a full back. Looking at page two and three of the metric’s top performers in TransferLab, we find central attacking midfielders and central midfielders featuring as well. Cutbacks don’t have to be executed only by wide players but can be worked by any player who makes runs deep into the penalty area.

TransferLab will enable recruitment teams to discover players outside of the obvious wide players who could perform a role like this for their respective teams. For example, with the rest of the filters remaining the same, here are the best performers in the cutbacks metric who are recognised as central midfielders. 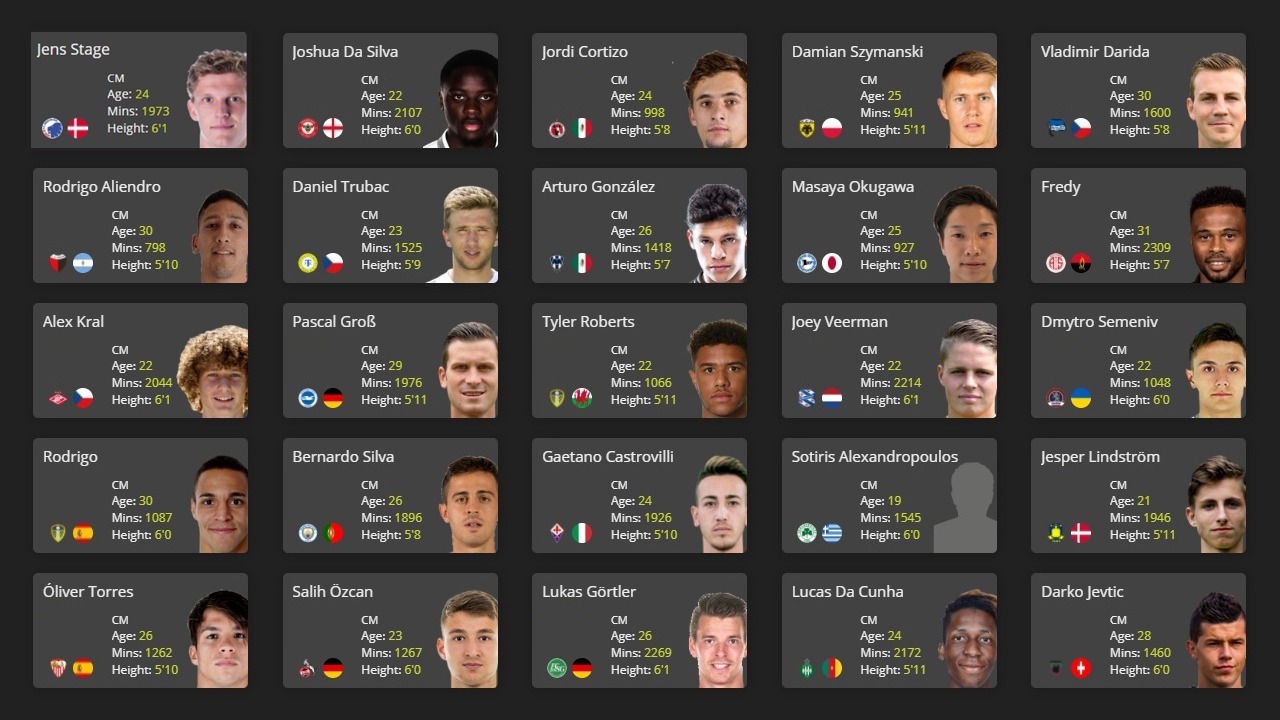 Any keen followers of the EFL Championship won’t be surprised to see Brentford’s Joshua Da Silva here as a huge part of his game is bursting into the box, where he will look to create for a forward or score himself.

Here is an example:

This passage of play followed a set-piece. As a result, Norwich had many defenders in the box and were able to block Sergi Canos from getting a clear shot on goal. However, this clip clearly demonstrates Da Silva’s ability to burst past players and get into dangerous areas to play cutbacks.

Brighton’s Pascal Groß is similar. Looking at his profile on TransferLab, we can see that he is in the 96th percentile for midfielders in the Premier League per expected assists:

He’s not just primarily a creator; he’s one of the best creators in the division.

The rest of the players on this list may be less obvious to those not regularly watching them. But this illustrates how TransferLab can assist with creating an initial shortlist to scout further.

As we know, smart recruitment teams look to try and sign players before they reach their prime, tying them down for their best years or maximising their value should they be sold on in future.

With that in mind, we can look at who the best performing players under the age of 23 are when it comes to cutbacks: 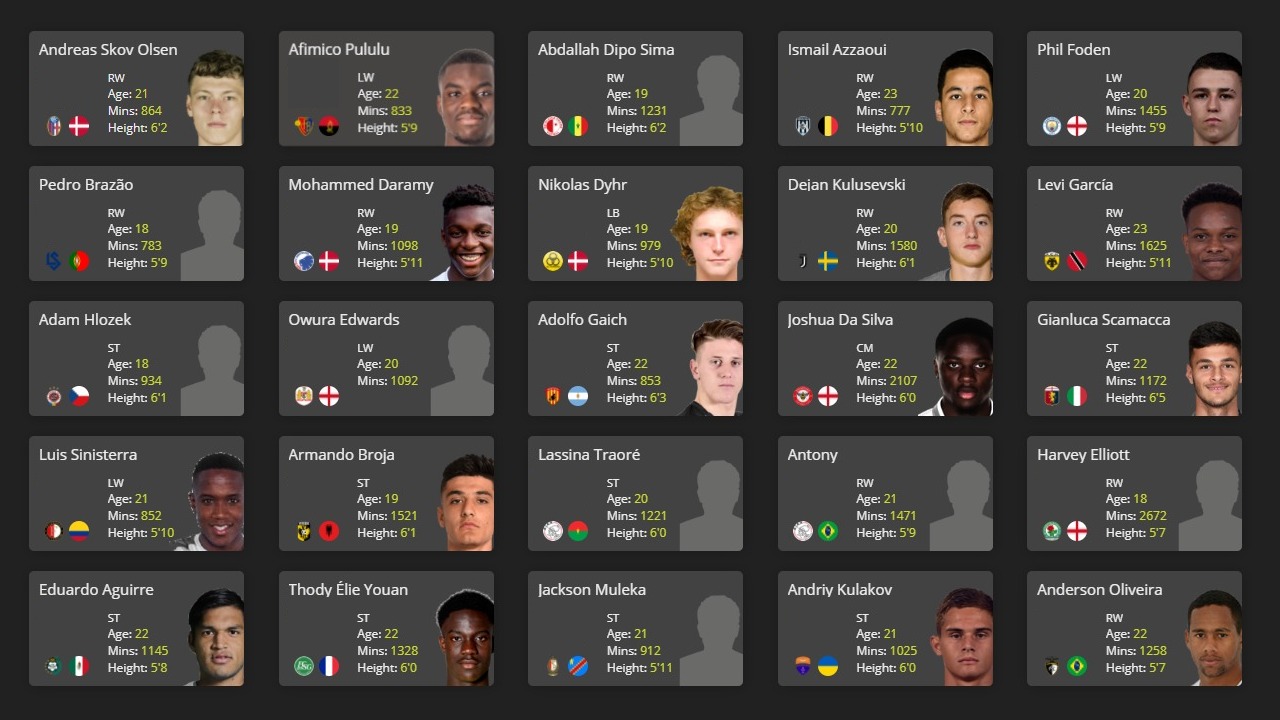 As Bologna’s Andreas Skov Olsen was ranked third for the metric without an age filter, obviously he comes out as the top performer. Some interesting players we didn’t encounter in our original search are Dejan Kulusevski, Adolfo Gaich, Gianluca Scamacca, Owura Edwards, Luis Sinisterra and Armando Broja. Josh Da Silva stands out as the only midfield player on this particular occasion.

A player I’d like to briefly focus on as one to watch is Copenhagen and Denmark under 21s Mohammed Daramy. An extremely direct player, he is capable of playing all across the forward line.

Here is his TransferLab profile as an attacking winger measured against all players in Tier 3 Leagues (which is where the Danish Superliga is ranked on TransferLab):

As you can see, Daramy ranks extremely highly for expected assists and dribbles. Notice on the heatmap how his activity is largely in wide areas high up the pitch. He’s a player whose first thought when receiving the ball is to utilise his excellent burst of acceleration and get to the byline.

In this example he’s able to go past two opponents at pace before picking out Jens Stage, who really should have done better with his effort.

Daramy is a player that still has some rough edges to his game, as one might expect given his age. However, through TransferLab’s cutbacks metric, you’re able to see the genuine value that he might bring to any prospective buyers. Don’t be surprised if he’s on the move in the not too distant future.