Coe’s Players To Watch: Gems From Around The Globe 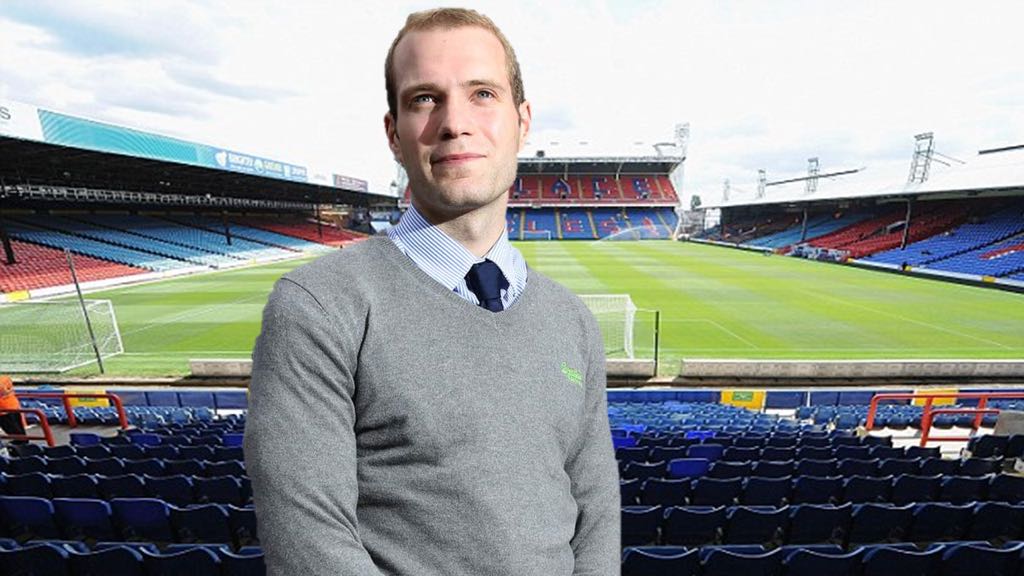 For the next instalment in our ‘Players to Watch’ series, Tim Coe takes the reigns, using TransferLab to highlight some gems that didn’t end up moving in the summer despite widespread speculation. He has recently left Crystal Palace where he was Chief Scout for five years, after beginning his career at Reading, Aldershot Town, and Huddersfield Town.

With the domestic and main European transfer windows at a close for the first half of the season, I thought it would be interesting to consider players based overseas who have been developed outside of Europe’s biggest clubs and, often despite widespread and persistent speculation, didn’t move over the summer.

Harold Moukoudi had his breakthrough season at Le Havre’s last season, represented France at the Toulon Tournament in May, and was linked with significant transfer fee moves to West Ham and Aston Villa before the end of the transfer window. He is a commanding presence in terms of size and strength and wants to defend. He steps out from the back and passes the ball with purpose. The data supports scouts opinions with his relatively high ranking in terms of aerial contests, shots blocked and pass completion. Le Havre are one of the bigger clubs in France’s Ligue 2 and have a history of unearthing young talent. They were in the promotion picture last season, so maybe they have retained the player in order to get them over the line this time around. It could also be because the teams that could afford his transfer fee – Le Havre have received significant transfer fees for Lys Mousset from Bournemouth and Ferland Mendy from Lyon in each of the last two summers – were put off by relatively poor output for interceptions and tackles. This suggests he prefers to defend with more protection which may not suit an expansive and front foot style. Good defenders are in relatively short supply though, so expect Moukoudi to get his move to a top level club in the event that Le Havre do not get promoted this season.

Wilmar Barrios has been one of the most eye catching players in South American football in recent years and continued his form into the World Cup in the summer for Colombia. As a defensive midfielder, he exhibits unusual dynamism, competitiveness, and persistence to destroy and block, he can move the ball on to get his team control, and he is good at locating the more creative players in attack. These qualities are reflected in his high contribution to his teams xG through interceptions, tackles, and shots blocked, and moderate ranking for pass completion percentage. In addition he also ranks highly for interceptions per 90mins (2.27). On this occasion I would be slightly more bullish than the data suggests in that I think he is capable of using the ball with more security, control and accuracy than his data profile projects. In a less physical and frenetic environment, his passing metrics may well improve. 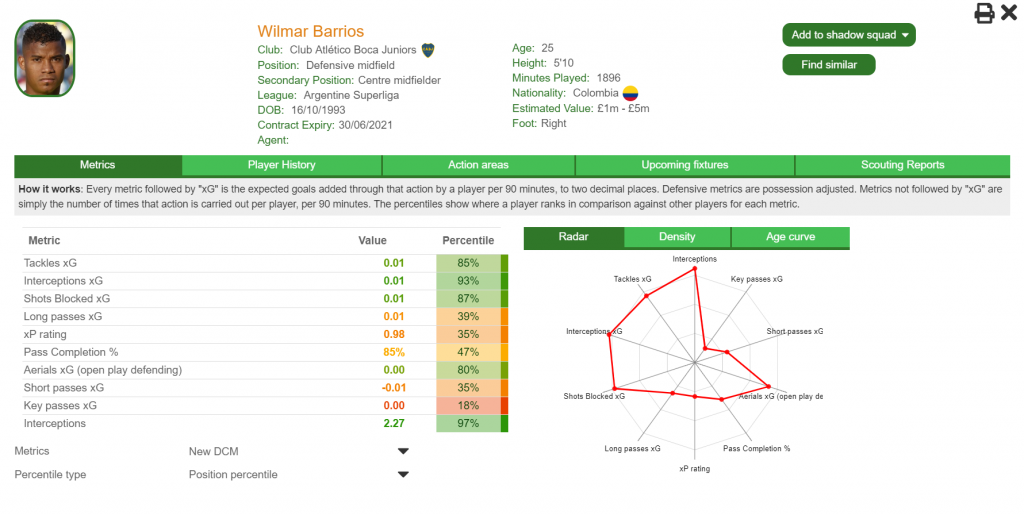 Miguel Almirón is in his second season at Atlanta United in the MLS. His signing showed the greater emphasis MLS clubs are placing on signing younger players – especially from South America – and showed the attraction of Atlanta given that he was already a league winner in Argentina with Lanus and a senior international for Paraguay. He is a real natural in terms of balance and athleticism. He has a distinct poise in his play and shows high level of enterprise, insight, and quality in creative situations. He sits in the top 11% for all forwards in league adjusted xG contribution for dribbles, passes into the box, through passes, crosses, and shots. I first saw him in the Copa America in 2016 in a very difficult game against Colombia where he showed outstanding responsibility, purpose and persistence to drive his team forward, especially for such a young player. It would be a shame for him to lose some of the qualities shown in the Copa America as a young player because he stays too long in MLS, where he is already comfortably one of the best players.

How does Almirón fair in comparison to the prodigious talents of Bayern Munich bound MLS star Alphonso Davies?:

Ismaila Sarr made a move for a significant fee from Metz, who themselves have had outstanding success though their connections with a Senegalese academy, Académie Génération Foot, which includes the transfer of Papiss Cissé, Sadio Mane, and Diafra Sakho in the past. He is an unusual physical proposition in terms of size, pace and power for a winger. He had some outstanding individual moments for Metz during the season before last but his first season at Rennes was only a moderate success due to a serious injury he suffered at the start of the season. He was also moved around in terms of his starting position which seemed to affect his confidence. However, he was one of the youngest and most eye catching individuals in the World Cup group stages and so hopefully he can achieve his potential and excel again this season. 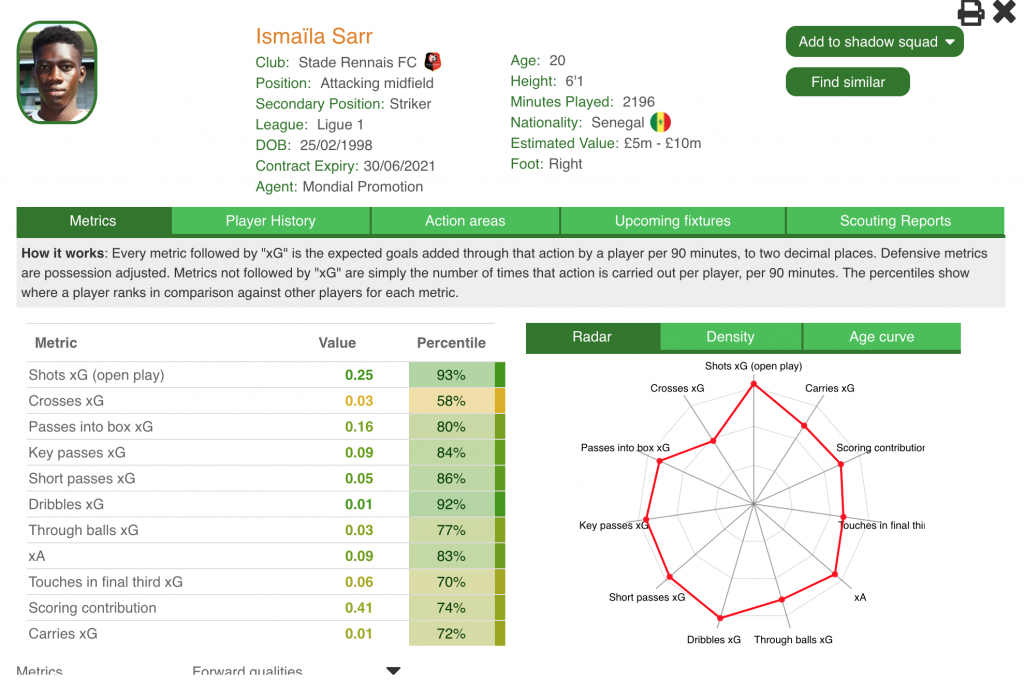 Maxi Gómez had an excellent first season in European football at Celta Vigo following his move from Defensor in Uruguay, including scoring 17 goals in La Liga and making his senior international debut for Uruguay. He is robust with good size, body strength and strong running legs. He combines this with attacking third purpose and aggression to provide the full package in the number nine role. Last season’s data gives indications of that with him scoring highly for passes into the box to provide for others as well as shots xG to get himself into consistently good goal-scoring positions. He deserves considerable credit for last season’s level of performance given that it was his first season in Europe and that he was thrust into leading the line in one of the most fluent and creative teams in Spain, with Iago Aspas and Pione Sisto comprising the rest of the regular front three. I was surprised he didn’t feature more in the World Cup, especially when Edison Cavani was unavailable. Perhaps the fact that other more experienced (but seemingly more limited) teammates were preferred to him suggests he still has some refining to do. He is already looking much more athletic than he did when playing in Uruguay and I think he is likely to show progress again this season.

Gómez compares well against two other young Strikers performing in La Liga with bags of potential, Morón and Batshuayi:

Analytics FC provides software and data services to entities within football looking to realise the gains possible from analytical thinking. Through a product development collaboration with Lane Clark and Peacock LLP, we provide cutting-edge software solutions such as TransferLab, which helps improve and simplify recruitment decisions. To find out more about TransferLab, including pricing and how to get a free trial click here, or to contact us, get in touch here.