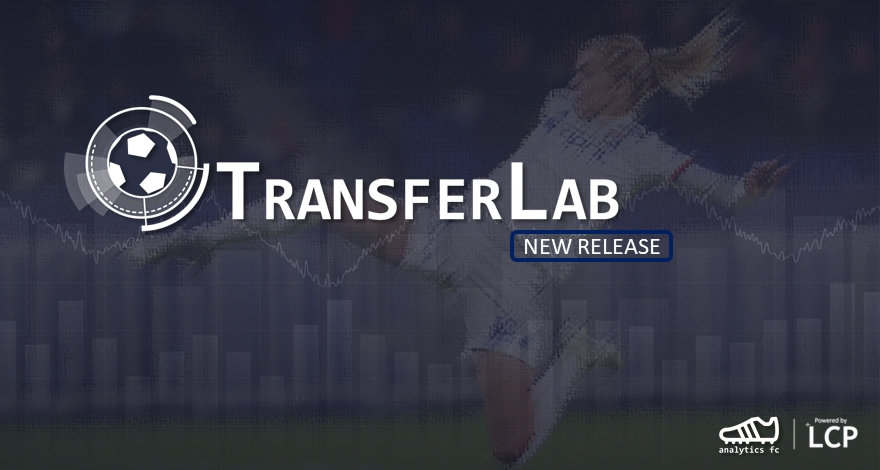 We’re delighted to announce the official launch of our TransferLab data-scouting platform for Women’s football.

Developed in partnership with LCP, TransferLab is the first data analytics product with a dedicated platform for the Women’s game.

It’s not just the availability of women’s football data which sets TransferLab apart. The powerful algorithm “under the hood” is the real game-changer.

Our algorithm assigns a value to every action a player makes during a match based on the effect the action has on the likelihood of the player’s team scoring or conceding.

For example, a player receives the ball in central midfield, the team might have a 1.5% chance of scoring at this point in the possession and also a 1% chance of conceding on the next possession.

That situation isn’t very valuable. But if the player executes a dangerous through-ball into the final third, the team is now in a much better position and might have a 6% chance of scoring and only a 0.5% chance of conceding. The pass would be worth the difference in their team’s situation before and after it.

The algorithm calculates every action and can therefore determine the overall impact a player has through all their actions. The impact is presented to clubs in terms of Goal Difference Added per 90.

This type of language makes it easy to understand for CEOs, sporting directors, scouts and coaches. It gives an idea of how much a player’s touches helped their team’s chances of winning, which in the end, is the sporting goal of any team.

The functionality and user experience of the platform are always at the forefront of our minds and many of the features in TransferLab have come as a direct result of feedback from our clients. Here are some of the highlights:

TransferLab provides a quality rating for each and every player on the platform, based on their performance in matches during a specified period (from the last month only up to three years).

Each player has their own profile which breaks down how their overall score is arrived at and shows their age curve, their position and their heat map.

You can also compare each player against their peers across leagues or across different tiers within the platform.

Users can rank players against their own specified skillset so each club can scout for players who suit their own style of play.

Using the Compare Players tool, you can easily create clear visuals which allow quick comparisons between players by skillsets.

Projecting how a player’s quality will change over their future career, our age curves offer future projections based on a statistical analysis of how specific skillsets improve or decline with time.

Identify a player who shares similar strengths and weaknesses to another player. This function allows a club to identify a replacement for a player who is aging or leaving the club.

Alternatively, a club can search for an alternative signing where a target player is unavailable or unobtainable (a ‘young Alex Morgan’, perhaps?)

Quickly identify the best player(s) in every position from any of the leagues included in the platform.

The Best XI tool is also searchable by age categories. For example, you can identify the best players aged under 23 in each position in any league.