Squad management strategies, super subs, and the importance of a strong bench We’d like to let you into a conversation we had recently with a well known English Football League Head Coach. We were talking about his approach to squad management. The Coach has a reputation as being thoughtful and innovative, which he is, but he’s also pragmatic and understands that keeping things simple can often help an organisation more than complex ideas. One part of our conversation revolved around the topic of “squad composition”. He shared the simple set of rules which he has used to great effect in achieving multiple promotions over his managerial career.

Firstly, keeping a small squad (22 players). This approach lends itself well to both maximising the Club’s playing budget but also encouraging the integration of young players. If the squad have any injuries the first option is to promote a young academy player to train with the first-team squad. Player number 23 is unlikely to get much (if any) game-time so it makes sense not to bloat the squad and block valuable training and “matchday bench experience” opportunities for Academy players.

The squad is then broken down into sub-groups. These groups have specific criteria when deciding which players form part of them. We won’t list all of the criteria here but below you should get a flavour:

These are players who will be providing the maximum output, the “difference makers”. They will also be earning the maximum wage that the club can afford within their wage structure. There is no restriction on age.

Give or take an injury or suspension, these players are the core of the team and are expected to start every match. They are identified as being “proven players” within the domestic league they are playing in. These players are often peak age players (24 – 28 years old).

These players are “recruited for attitude”. Scouting is focussed on finding players with the right character and with minimal injury history. These players will be mostly sitting on the bench. This can be difficult to get used to and requires a specific mindset. The behaviour in and around the dressing room and training ground needs to be of the highest standard. These players also need to be “good trainers”. This means having the ability to train consistently well and also be ready, physically and mentally to affect matches should they be called upon. These players will be on lower wages and there is no age restriction.

These players must be assessed by staff and scouts as having the ability to impact upon the “Starter” or “Star Player” category within a few years. If they are only deemed likely to impact upon the “bench player” category in the future they are not considered for this group. In addition, they should also have the potential to command a decent transfer fee in the future.

The approach outlined is intuitive and common sense, but this sort of strategic thinking is still relatively unusual in football.

The focus in analytics and data scouting is often around the Star players, Starters or Young Player categories. However, the Bench players, who are seen as hugely valuable by managers and coaching staff are often overlooked within the game. After all, whilst the above criteria clearly states that Bench Players should be good characters, I’m pretty sure that when called upon, Head Coaches will expect some quality output on the pitch too.

So, we thought we’d take some time to identify players who have excelled in this “bench player role”. We used a data-set from the 2017/18 season. Here’s the final league standings from that season to refresh your memory: 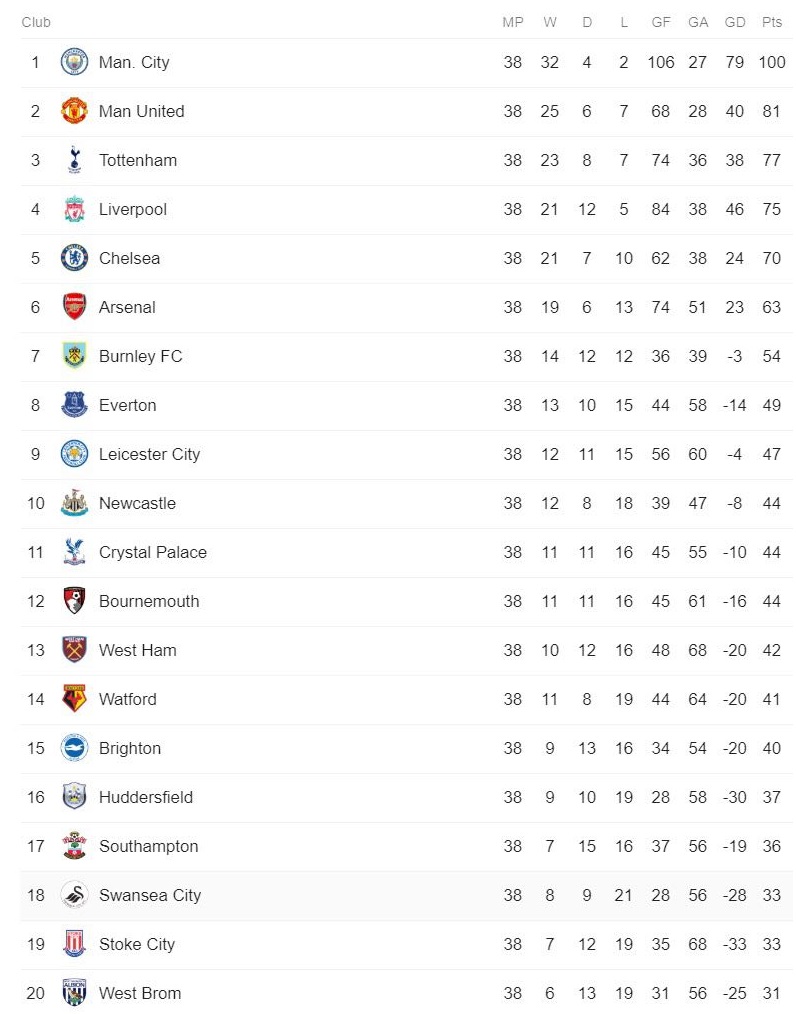 Using the rationale of our EFL manager above, we took player number 13 to 17 from each club based on their minutes played and looked into the contribution of those players towards the team. Our methodology for measuring contribution in this case is to use Analytics FC’s TransferLab algorithm. TransferLab basically assigns individuals a contribution value for each action which they take on the pitch (short pass, through ball, cross, dribble etc..). The model calculates the effect of each action on a team’s likelihood of scoring or conceding. The resulting output is converted into a football specific unit of measurement which can be considered in terms of “Goal Difference Added” or as we call it “All touch xG”.

So, back to these “Bench” players. For the purposes of this excercise we only looked at the total contribution of players (i.e. the sum of all their actions) to get a holistic view of a players’ impact upon the game. For a more in-depth view it might be a good idea to break down the substitutues positionally or go one step further and build profiles to assess the impact of certain groups of metrics. However, the total contribution or “All Touch xG” should give us a nice overview.

Here’s the overall contribution (All Touch xG per 90) of the Bench Players per club in 2017/18 together with the average of the players: 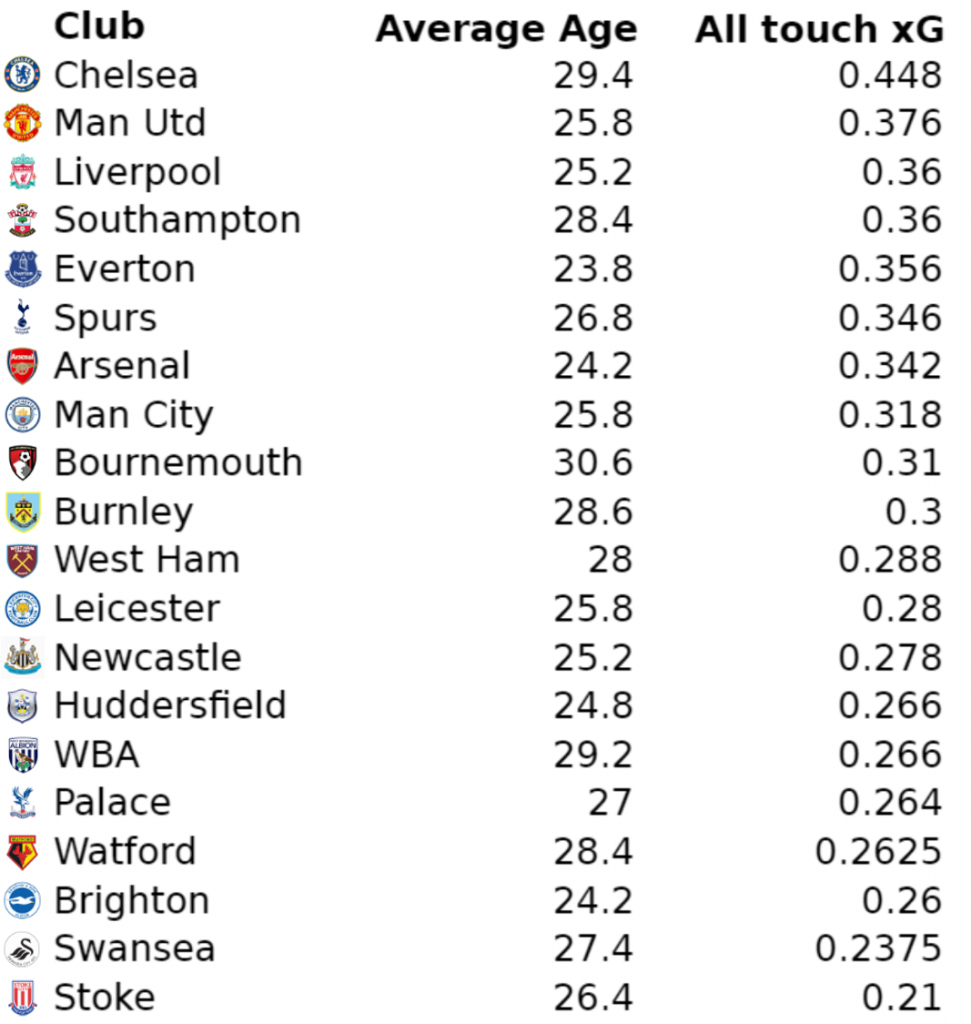 And here’s the top 20 individual contributors per 90: 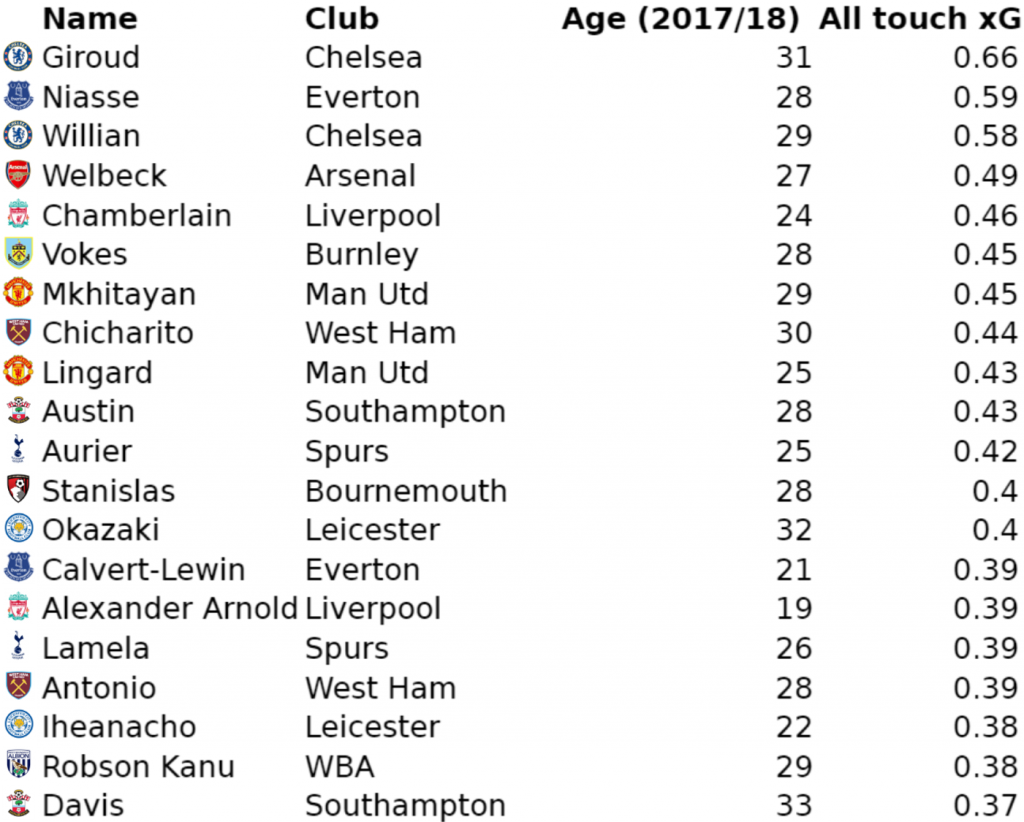 Let’s take a closer look at three interesting narratives which popped out from the above table:

Chelsea’s power-house of a bench might not have been enough to pip Liverpool to the final Champions League spot in 2017/18, but it was certainly a strong point during a difficult season for the reigning champions. An excellent contribution from players such as Giroud (the perennial “super sub”), Willian and Pedro.

Everton gave a relatively large number of minutes to young players such as Holgate, Kenny and Calvert-Lewin with these being supplemented by more experienced heads in Niasse and Coleman. That development time, whilst maintaining a good output, is a good model for clubs looking to either drive up young player value to sell them on or indeed to build their experience to make a push for the starting XI.

Southampton’s bench players had a completely different profile but might well be the reason they survived relegation in the 2017/18 season. Austin, Davis, Boufal and Long had the biggest contribution in the league. Each player contributed in different ways. Austin & Long combining for 9 goals, Davis adding a level of compusure and quality passing during his appearances and Boufal adding some penetrative running and creativity from the wing.

Whilst the analysis we undertook was just a quick look, it does suggest that there is some value in assessing Bench player contribution as its own process with edges to be had. Players 13 to 17 play on average approximately 30% of Premier League game minutes (including injury time). That’s equivalent to around 1087 game minutes each per season. That’s a fair amount of time to make an impact. With numerous leagues and competitions globally moving to five substitutions (albeit temporarily for now) there is a distinct possibility that we will see a move to develop tactical strategies which might be devised and employed by analysts and coaches to maximise the impact of substitutions. The Bench player may not be the most glamorous, but they could certainly be the difference maker over the course of an arduous league campaign.