How should Tottenham replace Christian Eriksen?

There’s no secret about the existing holes in Tottenham Hotspur’s squad or the lack of transfers to address them in the last two years, though the signing of Tanguy Ndombele this week will go some way to assuage their midfield depth issues. However, should Christian Eriksen head off to Real Madrid this summer – a situation that appears very much up in the air – Spurs’ need to replace him will instantly becomes as urgent as any other issue.

Profiling exactly what Eriksen does is a little difficult; ‘creativity’ is quite a vague term. Certainly Expected Assists (xA) is both a value worth looking for in of itself and also something that is often partnered with general passing brilliance.

However, filtering exclusively through the xA metric won’t differentiate between players who are creating their chances primarily through inventive passing from those doing so more through dribbling or by simply operating as forwards. These are more like the profiles of Dele, Son and Lucas Moura – players Spurs are already stocked up on.

Using Analytics FC’s data scouting tool, TransferLab, we can explore a much bigger range of metrics to better capture the niche of Eriksen’s defence unlocking ability. The algorithm which powers the platform awards a value to every action (both attacking and defensive) during a 90 minute match based on that action’s contribution to the team’s likelihood of scoring or conceding.

A key feature in TransferLab is the ability to create your own positional profiles. With this in mind it was important to build a profile which readily captures Eriksen’s contribution value through both long and short passes, through balls and passes into the box. Further, we can add in some weighting for the value of his tackles and interceptions in order to synthesise Eriksen’s contribution in counter-pressing.

By creating this custom profile in Eriksen’s image we are able to search for the most similar players around the world to his skillset. Here we land Christian Eriksen himself at 100% similarity to himself (of course), closely followed by Gaston Ramirez, James Rodriguez and the ginger Eriksen, Kevin De Bruyne. 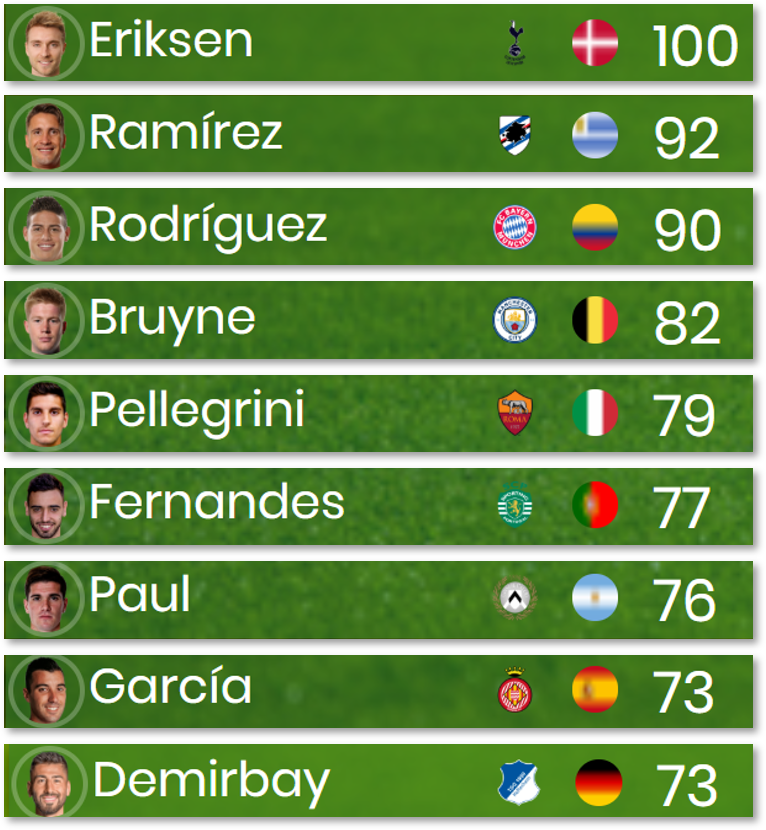 Under this search, heavily linked players like Bruno Fernandes and (further down the list) Giovani Lo Celso each show up with highly promising ratings suggesting Spurs’ own scouts are looking in the right places. 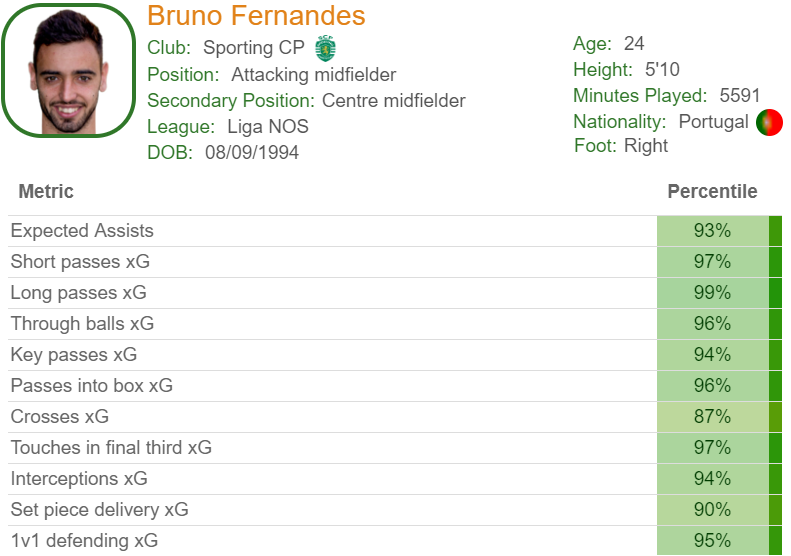 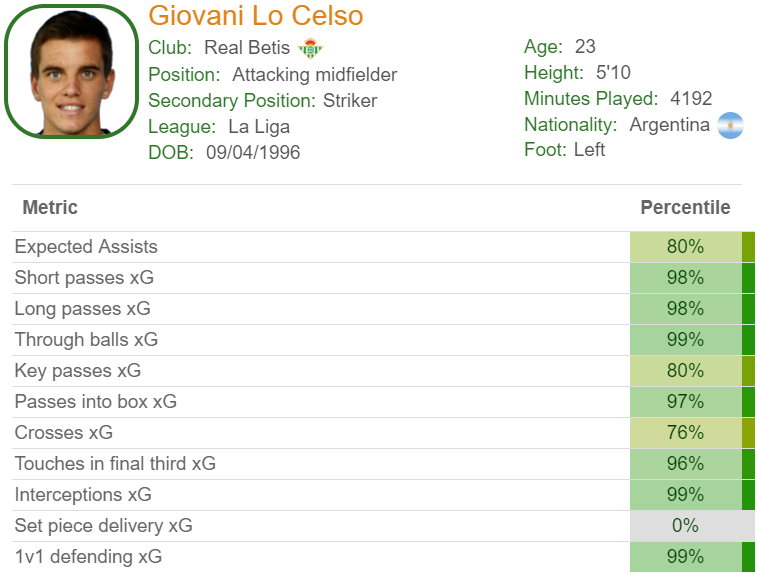 But should deeper midfield and full-back issues absorb the budget, Tottenham may well need to seek out younger, cheaper players as the next in line to the creative elite?

Firstly, 23 year old Lorenzo Pellegrini, who has also been linked with Spurs score highly. There is a maturity to Pellegrini’s game that is way above his years and he certainly has similar tasks asked of him – both in central and attacking midfield – at Roma as Eriksen does at Spurs. 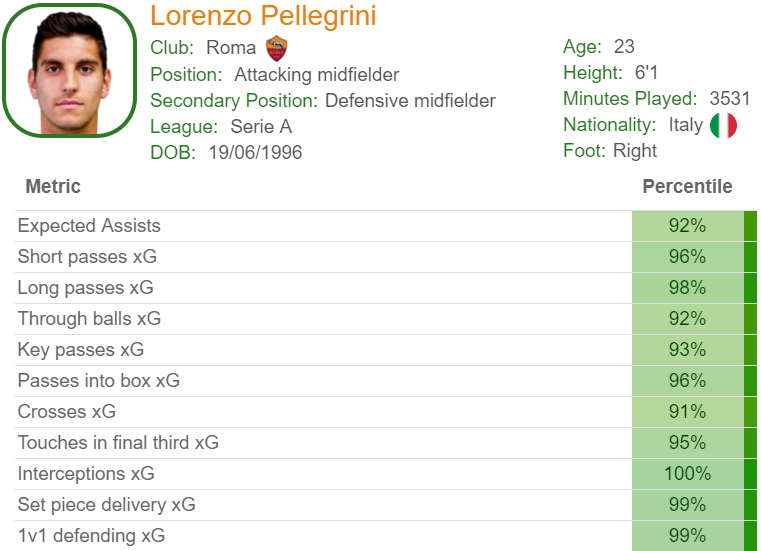 Given Pellegrini’s established position at a top European side, he probably wouldn’t be dramatically cheaper and, as a downgrade on Eriksen, there would still be a large gamble on his continued development.

Returning to the profile we created and searching across all 90 leagues within the TransferLab system we can also cut the age limit down again to 21 years or younger. This reveals a handful of already well-known young stars. David Brooks is a slightly different profile from what we’re after here and Martin Odegaard and Hassem Aouar are likely very expensive.

Top of the list, however, is Oscar Melendo. The 21-year-old has graduated from the Espanyol academy and broken into the first XI over the last two seasons playing a variety of positions. 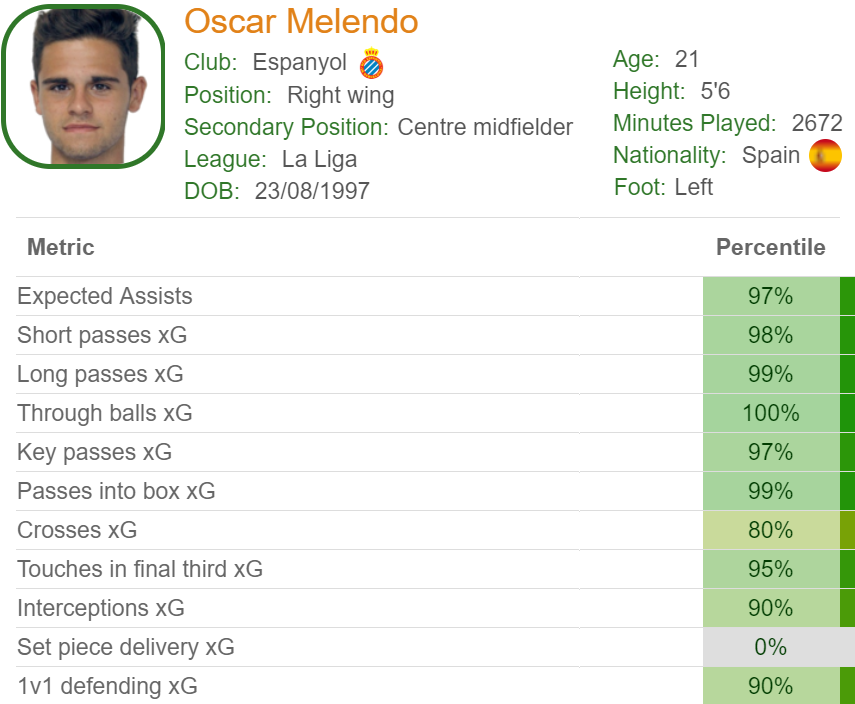 There doesn’t appear to be a huge amount of discussion around this player but he stands out on the pitch with his exceptional first touch.

He certainly looks promising creatively but of course there will be questions with how that might scale to the Premier League, but the bigger issue is, despite his time in central midfield, his defensive contribution is below the level of other candidates in our search.

Further down the list Borussia Mönchengladbach’s Michael Cuisance shows up impressively at only 19 years of age. 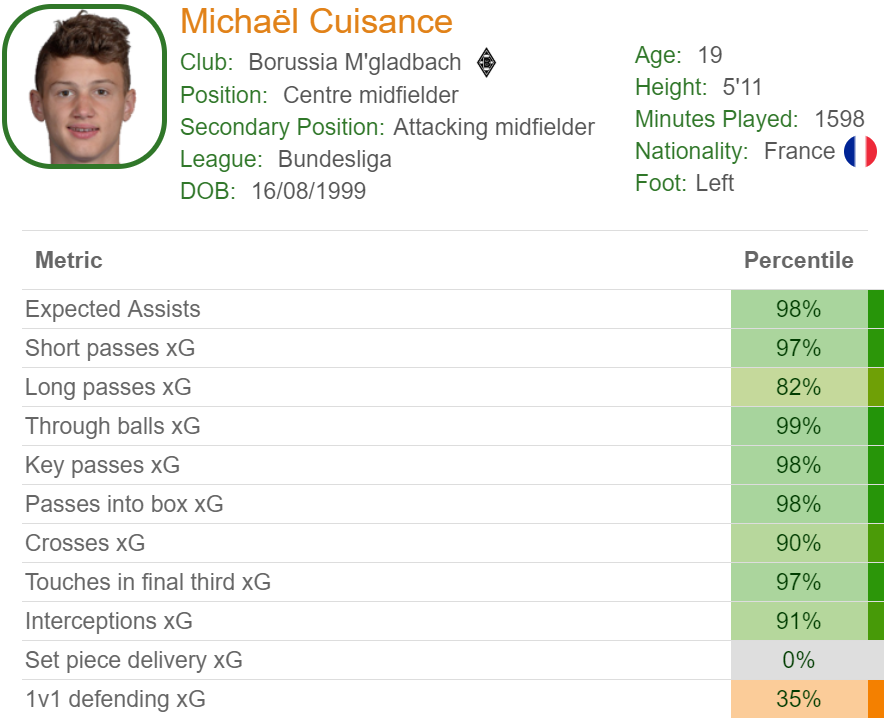 The standout aspect of Cuisance’s game are his throughballs both in counter-attack and more established possession. Though, he can sometimes be guilty of attempting to force these passes or execute them without any guile.

Finally, a little further down the list is the intriguing KAA Gent player, Giorgi Chakvetadze, who operates more consistently in forward and wide roles. 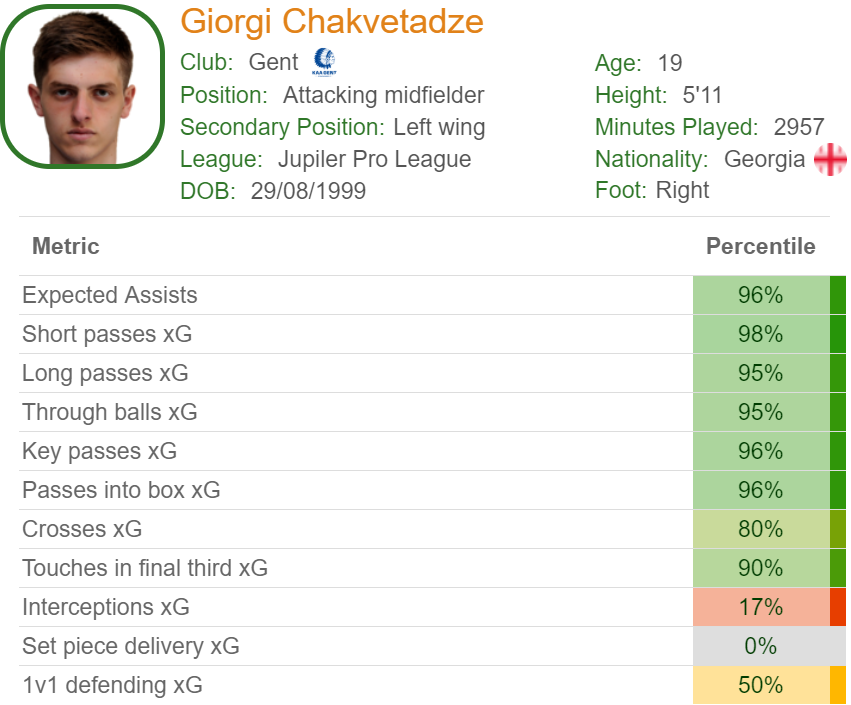 Chakvetadze’s defensive numbers are well below the other players we’ve highlighted so far, however, he is definitely the most aggressive and physical of our highlighted players. Partly, that’s down to Gent’s aggressive end-to-end style opening up space for players to run in to. However, Chakvetadze is still demonstrating creative passes at the end of these moves.

Chakvetadze’s directness would definitely be a change in style for Tottenham but his two-footedness, apparent physicality that would likely allow him to thrive in the Premier League, youthfulness and probable affordability may make him an enticing prospect regardless.

Using TransferLab, we have surfaced a range of options that could make sense as Eriksen replacements for Tottenham. Rather than using one or two key metrics, the profile-building functionality allowed us to prioritise what is most important about Eriksen’s contribution for Spurs and focus on that. It won’t be easy to replace the talented Dane, but it is certainly possible.