Team of the Season: English League One After the fun we had with the Championship Team of the Season we published last month, we thought we’d go again by comparing our League One Team of the Season to the official one released by the EFL. Our Best XI engine within our TransferLab platform allows you to quickly see the best players in any league according to our unique player performance algorithm, while you also have instant access to the depth charts of any club in across sixty leagues worldwide.

The most powerful feature in TransferLab is the ability to create your own positional profiles. For example, rather than Analytics FC (or anyone else) prescribing what a centre-back should be measured on, the user is able to define their own centre-back profile to match their game style. In this way, a ball-playing centre-back could look bad in a profile for a more dominant “head-it and kick-it” type centre-back and vice versa. The scores that you will see next to the players in the team lineups (ranging from 0-99), are a reflection of profile rather than of absolute player skill – we do not say that Eden Hazard is a 97, but that Hazard is a 97 if you are looking for an all-round creative-threat who carries the ball, dribbles, creates, and gets chances for himself.

To create Teams of the Season, we therefore had to choose profiles for each position. For the English League One, we have chosen:

AM: Free Attacker (Built around chance creation, passing around the box, combination play, assists and so on)

To a large extent, these choices are arguable: you might personally prefer defensive full-backs, or want to look at strikers who are more adept at playing as a target man, prioritising heading and hold play than pure chance getting or goalscoring qualities. And if you use TransferLab, you’re able to tailor these profiles to suit your requirements!

However, these are the profiles we went with as we felt they created a good feel for the expectations of top performing players in League One. We also went with a 433 formation (in-line with the EFL’s approach) to populate the best players in this year’s competition. Additionally, players had to play 1500 minutes in the league this season to qualify. Finally, it should be noted that metrics within TransferLab are league adjusted so that they can be directly compared against other competitions such as the Premier League to help projected potential performance in different competitions.

The Official PFA of the Season: 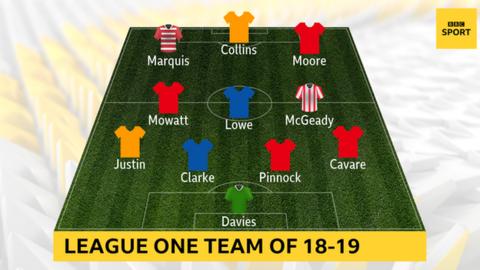 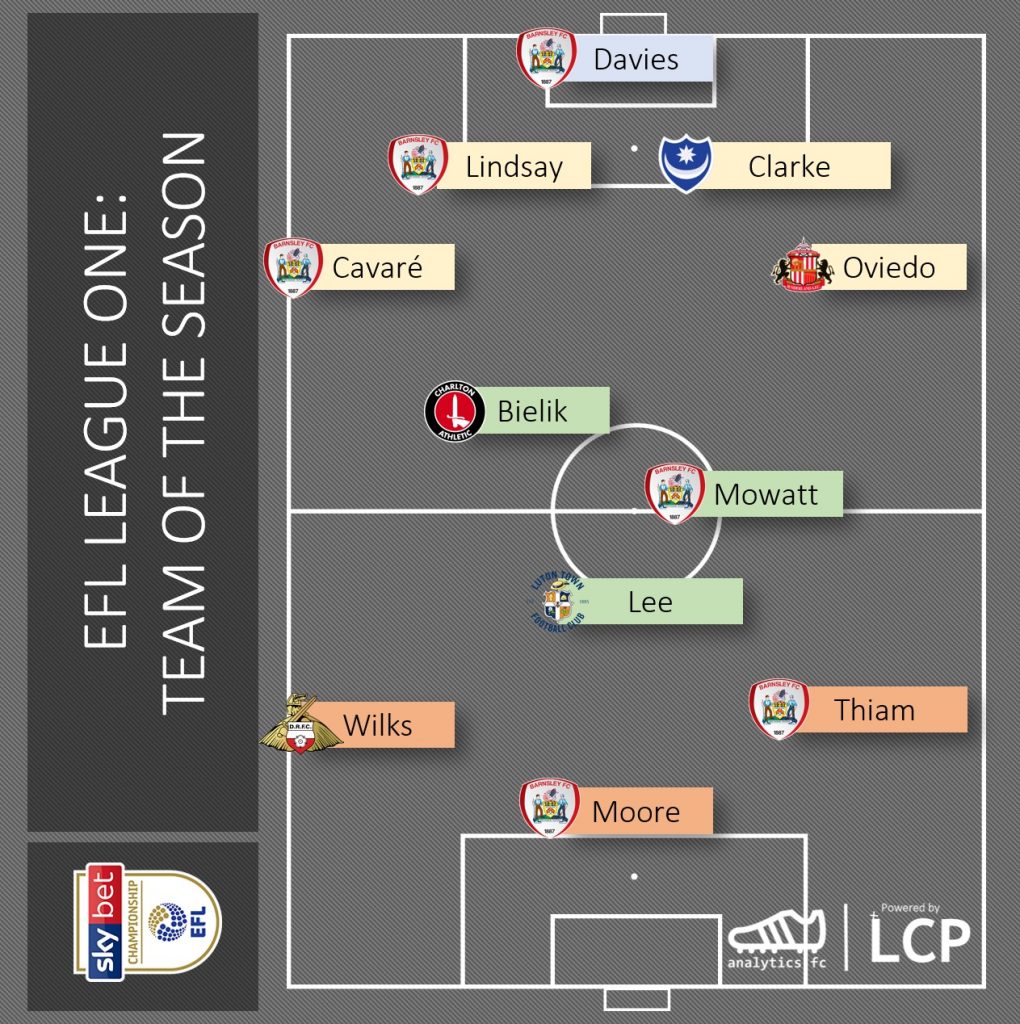 Kieffer Moore, Alex Mowatt, and Dimitri Cavare, all of Barnsley, are 3 of the 4 players to overlap between the PFA Team of the Season and TransferLab’s. The other is Matthew Clarke of Portsmouth, who has had a strong season in central defence that has seen him linked to the likes of Brighton and Stoke this summer.

Mamadou Thiam is another Barnsley player that makes our Team Of the Season. His attacking output has been elite relative to the league, both in terms of getting chances himself and creating them for his teammates:

Another notable inclusion is Krystian Bielik, who has been on loan at now-promoted Charlton from Arsenal. The Polish U21 international, who can play CB too, has had a fantastic season as a defensive midfielder: 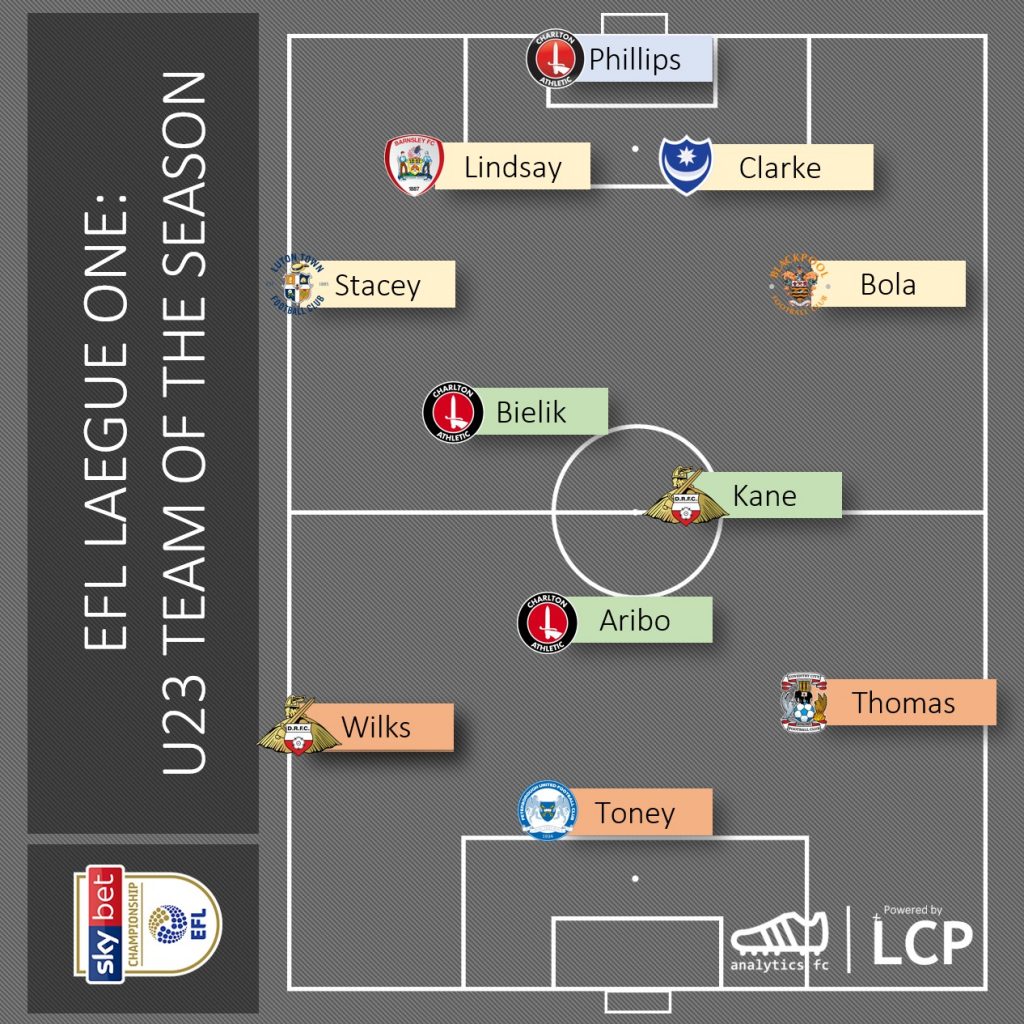 Marc Bola, who joined Blackpool from Arsenal and won Player of the Season for them, makes the team after a tremendous attacking season from full-back. Joe Aribo makes it in central midfield – the English midfielder is reportedly still available on a free transfer this summer, and may make the jump straight to the Premier League with Manchester City amongst the interested clubs. Ivan Toney has scored 16 goals in League One this season for Peterbrough after joining from Newcastle, and may push for top-scorer in the league next season.