Team of the Season: English Championship Over the next few months, we will be comparing our Teams of the Season to the official ones released by various leagues around the world. Our Best XI engine within our TransferLab platform allows you to quickly see the best players in any league according to our unique player performance algorithm, while you also have instant access to the depth charts of any club in across sixty leagues worldwide.

The most powerful feature in TransferLab is the ability to create your own positional profiles. Rather than Analytics FC (or anyone else) prescribing what a centre-back should do, the user is able to define their own centre-back profile to match their game style. In this way, a ball-playing centre-back could look bad in a profile for a more dominant “head-it and kick-it” type centre-back and vice versa. The scores that you will see next to the players in the team lineups (ranging from 0-99), are a reflection of profile rather than of absolute player skill – we do not say that Lionel Messi is a 100, but that Messi is a 100 if you are looking for an all-round goal-threat who dribbles, creates, and gets chances for himself.

To create Teams of the Season, we therefore had to choose profiles for each position. For the English Championship, we have chosen:

WM: & AM: Free Attacker (Built around chance creation, passing around the box, combination play, assists and so on)

To a large extent, these choices are arguable: you might personally prefer defensive full-backs, or want to look at wingers who are more direct in style, prioritising 1v1 dribbling and crossing rather than combination play and creativity through passing. And if you use TransferLab, you’re able to tailor these profiles to suit your requirements!

However, these are the profiles we went with as we felt they created a good feel for the expectations of top performing players in the Championship. We also went with a 433 formation (in-line with the EFL’s approach) to populate the best players in this year’s competition. Additionally, players had to play 1500 minutes in the league this season to qualify. Finally, it should be noted that metrics within TransferLab are league adjusted so that they can be directly compared against other competitions such as the Premier League to help projected potential performance in different competitions.

The Official Team of the Season: 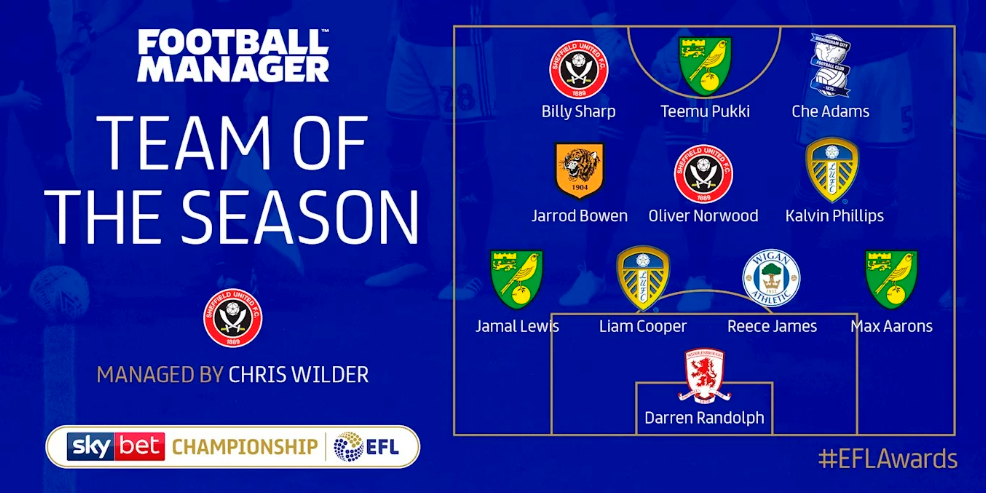 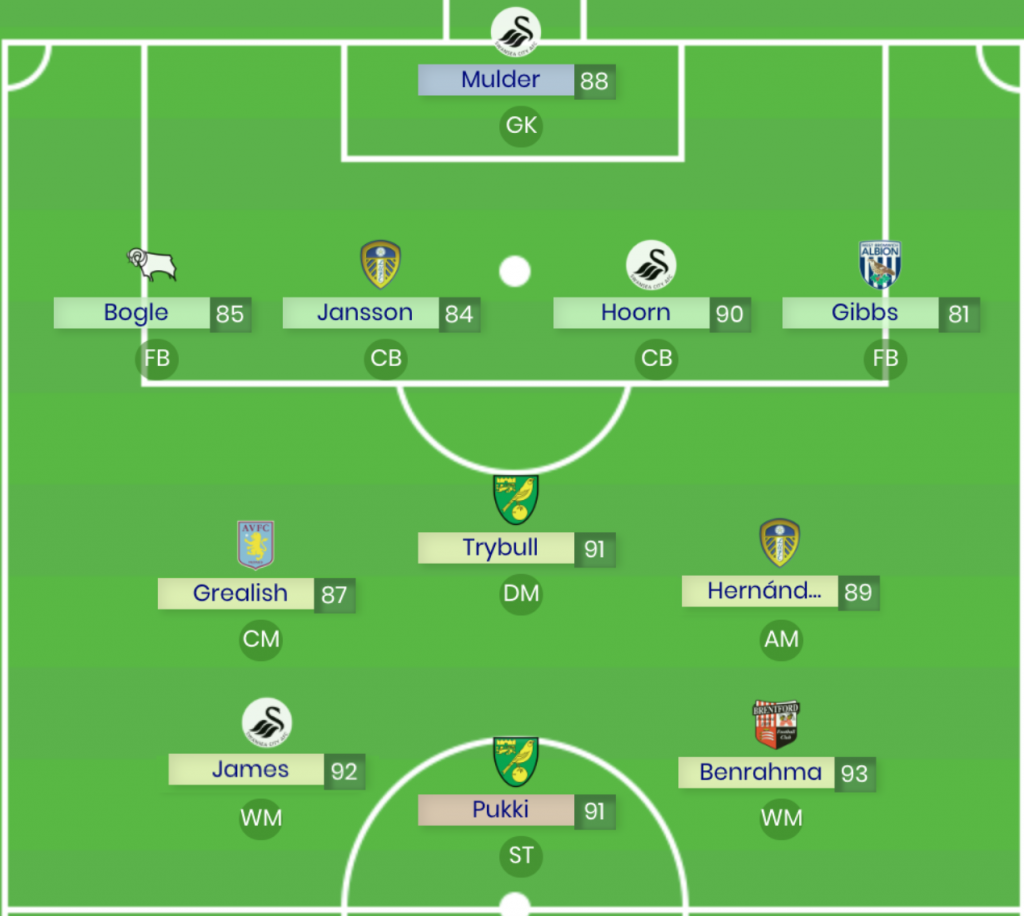 Most notably, TransferLab has chosen a few players who were not at one of the best teams in the league, but whose underlying performance gave them high scoring quality scores in the chosen profiles: Said Benrahma, Jack Grealish, Kieren Gibbs, Jayden Bogle, Erwin Mulder, Daniel James, and Mike Van Der Hoorn.

Jack Grealish, who didn’t make the official Team of the Season

Pablo Hernandez, who Leeds fans were shocked did not make the official Team of the Season, comfortably makes ours. Some may be surprised to see the Swansea speedster Dan James make the full team of the season, but his underlying output is fantastic and he was recently described by an opposition manager as one of the best players in the league.

Dan James’ sensational goal vs Brentford in the FA Cup

Tom Trybull of Norwich profiles fantastically well as a destructive defensive midfielder, with a quality score that was 11 higher than the next best candidate, Kalvin Phillips, who made the official version. You can see below the outstanding defensive contribution of Trybull: 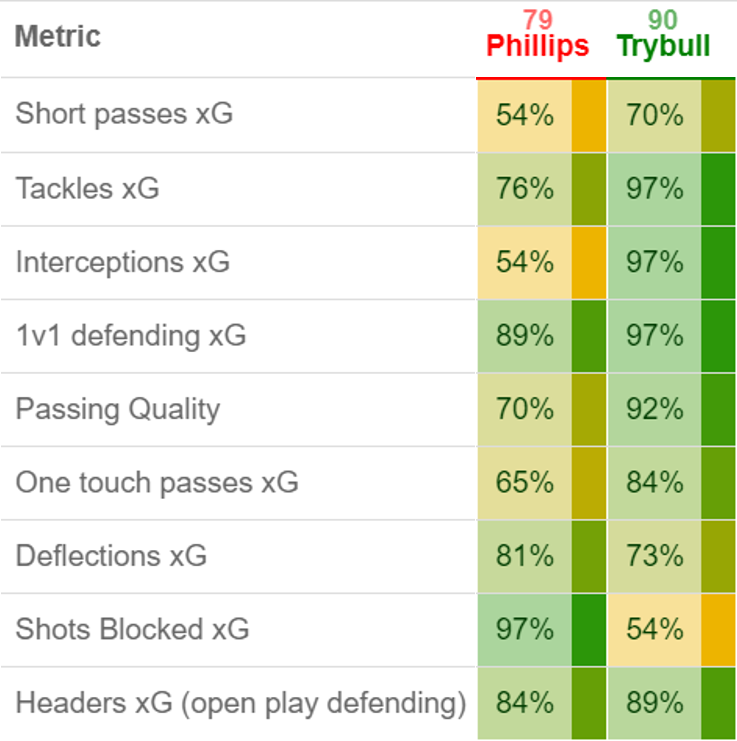 At full back, neither of the young Norwich players selected for the official Team of the Season made our selection. That’s not to say they are’t promising players who’ve had a fantastic season, but according to our attacking full-back profile, TransferLab preferred Jayden Bogle and Kieren Gibbs’ underlying attacking output: 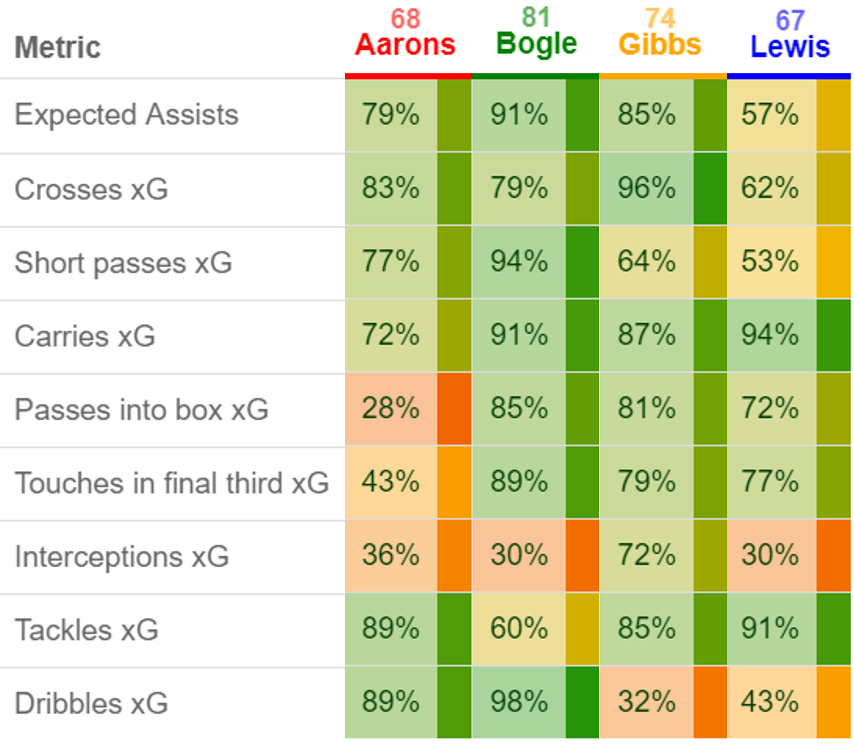 Central defence was the other area which showed up a slightly different selection. As mentioned before, Mike Van Der Hoorn made our line-up. Our ball-playing centre-back profile also preferred Pontus Jansson of Leeds to his teammate, Liam Cooper. 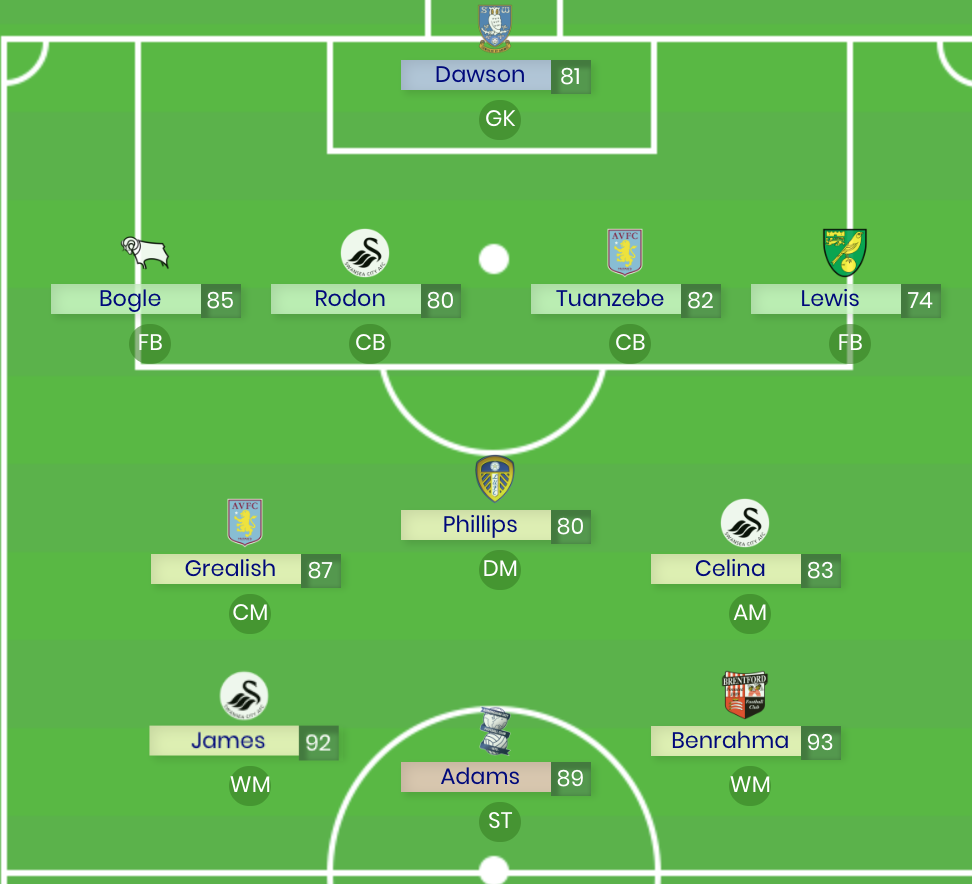 Che Adams and Kalvin Phillips who made the official Team of the Season, make this U23 version. Bersant Celina and Joe Rodon, who all play for Graham Potter’s Swansea City with Dan James, have had great seasons despite a lack of a play-off push from the South Wales team. Emiliano Buendía was just pipped as a wide midfielder by Dan James but Jamal Lewis makes the team (as he did in the official one), with Norwich going up to the Premier League with a seemingly strong core of young players.